Home Blog The Antidote to Electronics

The Antidote to Electronics

Where is the tablet?

As homeschoolers, we must admit that technology has given us more flexibility and options in how we homeschool. But with that new technology comes added responsibility. How do we manage our children and their gadgets? What would be the antidote to electronics?

“Go outside and play.”

A regular command if I and my friends started getting too wild inside the house.

At that time though, we didn’t have all the gadgets that kids have now.

The only thing we got hooked on was television. And then, not so much.

Suitable shows for kids ended at a certain time.

And nighttime soaps came on.

It was more fun to go in our rooms and play with our dolls or action figures.

But, even when color basic computers came out, our parents urged us to go outside and play.

And those new computers were great. You could write out a command and watch it get done.

I’ll admit, I didn’t get much further than creating a figure that could do a few actions.

But, what about nowadays?

Now that the kids can take the screens with them?

How do we allow them to be connected yet not tethered?

Can we make sure they don’t get stuck? For our kids, is there an antidote to electronics?

I remember a scene I once saw in a restaurant.

A scene that seems all too familiar now.

A young man and an older man – perhaps father and son – sitting at a table. They placed their order and then both retreated to their gadgets.

No conversation. No interaction.

At that time, I couldn’t believe it.

What was the point of going to a restaurant to eat if you weren’t going to speak to one another?

Perhaps mom was out? Maybe she had a meeting or was working late?

Maybe it was dad’s time with his son?

So many things went through my head at that time to excuse them from not interacting with one another.

But I concluded that there was no excuse.

There was no need to hide behind those small screens.

So, what could they have changed?

How could they have untethered themselves from the pull of “the gadget”?

Perhaps the two could have made an agreement before dinner that there would be no screentime until they returned home (if that was the scenario).

Maybe dad could have engaged his son a bit more.

There are so many ways that scene could have gone differently.

I like to think about that scene and ask myself how I can engage my children without having to rely on gadgets.

I know, it may be work on the front end. But I have seen the positive effects the slight changes have made in my children.

This year, we cut off cable television.

We didn’t get rid of the television.

As a matter of fact, we have three television screens in our home. One is to play DVDs, one is for the regular digital antenna and the other is to hook up to our Amazon stick.

That allows us to manage what we all view.

Since cutting the cable though, I have seen my kids become more engaged in creative pursuits. They don’t turn on the television without thought.

Instead, they begin to use their imaginations.

Boredom strikes them. So, I remind them of the many items in their room. For them to entertain themselves.

An Antidote to Electronics

Our family has become more involved in permaculture.

We are learning about medicinal plants, consuming less and how to leave a minimal footprint on the earth.

I guess you could say learning how to find healing in nature gave us an antidote to electronics.

Getting back to nature helped us learn to put the gadgets in their proper perspective.

In fact, for an entire month, my oldest had no interest in her Kindle or electronic games while enjoying life on the farm.

She was outside playing. In nature.

I like the way Caleb explains how nature is an antidote to electronics.

Take a look below.

If you are looking for more ways to explore nature to find your own antidote to electronics, try these ideas: 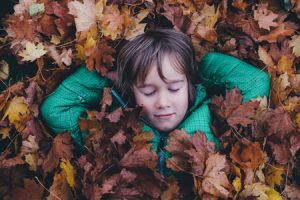 Now, “Go outside and play!”

Get a book called
KIDFUN: 401 Easy Ideas For Play by Sharla Feldscher
It’s endless fun all without electronics